Priestley Lecture: The air we breathe

Mechanical engineer Professor Cath Noakes thought she was tucked away in a fairly obscure niche area of academic work as a specialist on the modelling and management indoor air quality. That all changed when Covid-19 started to spread in early 2020. She stepped into a high-profile position as a member of SAGE, the Government’s scientific advisory group on emergencies, contributing her knowledge of the fluid dynamics of airborne infection and of ventilation as a means to reduce transmission. From summer 2020, she joined with other scientists to put across the implications of insights about aerosol transmission of the virus and appropriate mitigation techniques, resulting in the amendment of the simple public health slogan to ‘Hands, space, face, fresh air’. 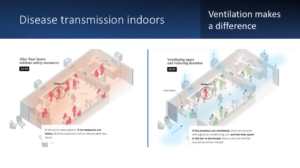 On top of several prestigious academic awards, in October 2020 it was announced that she was to be given an OBE for ‘services to the Covid-19 response’ in recognition of her vital role and achievements in convening the SAGE environmental modelling working group.

The annual Priestley Lecture of the Phil & Lit keeps alive a link with scientist Joseph Priestley (1733-1804) who spent six years in Leeds from 1767 as Minister of Mill Hill Unitarian Chapel. He carried on with his scientific experiments and it was while he was here that he identified what later came to be recognised as oxygen. He was a founding member and first secretary of The Leeds Library.