We have vivid evidence for Leeds in 1821: what was where – streets, buildings and facilities; influential people; main events of note; how the townspeople earned their living and what they were concerned about; the state of health care; education and cultural life; and the movement of people, materials, goods, energy & ideas.

Our main sources about Leeds at this exact moment are a trade directory, a detailed map complete with identification of all the public buildings, the Census of that year and newspaper reports. The Leeds Phil & Lit, founded just two years earlier, moved into its new, purpose-built hall on Park Row in the spring of 1821, and we know who was involved in these early days as well as the list of events that was offered. All this can be read in the wider context of historical analysis of the era after the Napoleonic Wars as Britain was going through a period of rapid and turbulent change.

Leeds had been a hub of commerce for centuries, specialising in the trade in woollen cloth. With advantages of waterways and natural resources, especially coal, the town was well placed to be in the forefront of industrialisation. Integration of all cloth-making processes in new ‘manufactories’, with mechanisation progressively replacing manual elements, led to increased output. There were possibly 70 factories by 1821, though the majority of the workforce was not in factories and despite woollen cloth comprising a third of the value of national exports the local economy was becoming ever more diverse.

This positive story of entrepreneurial effort and innovation has to be set against the deterioration in living and working conditions for many locals and new incomers. The 1821 Census recorded nearly 84,000 people within the parish of Leeds – up by 34 per cent since the Census of 1811. It was now one of the most populous towns in the country. The old streets became increasingly congested and unhealthy; unplanned, piecemeal development of small houses on the east side of town was well under way and many of these dwellings rapidly became dangerously insanitary. Even the new, planned streets of the west end were not desirable residential alternatives for long, as smoke from factories and many other buildings filled the air.

Victory over Napoleon was followed by several years of economic instability and social unrest. A swelling labour force, mechanisation causing dislocation and fear, some poor harvests, regressive taxes and lack of inclusive democracy made for a volatile political environment.

Pressure for reform focused on prices (and the impact of unfair taxes), wages and representation. It took until the early 1830s for the growing towns of industrial Britain to gain their own MPs, for more (male) citizens to be able to vote, and for major local government reforms. Effective legislation to improve working conditions was also some way off. Meanwhile children were amongst the workforce putting in long hours in mills and other businesses that are all listed in the Baines Directory, published early in 1822. By 1821, economic growth was widening opportunities and the workforce was less inclined to insurrection. But clashes continued between the Tory government, under long-serving Lord Liverpool, and the Whig opposition.

The Church of England, an essential element of ‘the Establishment’, was aware of the threat from non-conformist groups (Methodists, Baptists, Quakers, Unitarians, Congregationalists & others). Money was poured into church building in an effort to provide for new neighbourhoods, though chapels continued to outnumber churches. An inadequate patchwork of education was provided by the Church and charities, chapel Sunday schools, the old Grammar School and small independent academies. The right for every child to have at least minimal education was still half a century away, as was the foundation of the Yorkshire College of Science (later the University of Leeds). So the Phil & Lit, with its nascent museum and library as well as its lectures, offered a significant addition to public culture in a town that, aside from its 150 taverns, had two subscription libraries, one theatre, a music hall and the Assembly Rooms.

While factionalism and heated debate played out in public meetings, Parliament, the newspapers and in private conversations, the Phil and Lit had decided that the Society would be open to all, regardless of political or religious affiliations, and that meetings would steer clear of these contentious topics. Amongst the men who led the Society at its inception were Tories and Liberals, Churchmen and non-conformists, merchants, industrialists, scientists and medical men (including physicians and surgeons practising at the Leeds General Infirmary just round the corner from Park Row). Women were welcome to attend the lectures but it was many decades before women were invited to speak on the platform or elected to the Council of the Society. Ahead lay so many struggles and discoveries, reforms and innovations.

Maybe the Society of 2221 will look back and consider the life of the city 200 years before. It will be even harder to summarise adequately within an hour.

After studying geography at the University of Cambridge, Rachael Unsworth stayed on to do a PhD. In the mid-1980s she moved into commercial research and worked for a firm of surveyors in London. Back in Yorkshire from the mid-1990s, she was a part-time lecturer at the University of Leeds until 2013, specialising in urban development and the geography of natural resources.

From around 2000 she became involved in research, policy and practice in the city of Leeds: planning, urban design, development and regeneration, housing and environment. Consultancy work from 2003 has encompassed case studies on housing, regeneration and regional development.

She was co-writer and editor of ‘21st century Leeds: geographies of a regional city’ (published 2004) and project managed and compiled ‘Leeds: Cradle of Innovation’ (published 2018).

Since 2018 she’s been running Leeds City Walking Tours, taking groups of locals, visitors and professionals on a range of tours in different parts of the city. Covid-19 restrictions led to Zoom ‘tours’ and in future there will be a mix of on-street and on-line events. 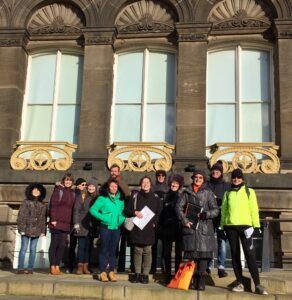