One of the most magnificent specimens in the Leeds City Museum collection has recently been restored thanks in part to a large grant from the Leeds Phil and Lit Society after having been hidden away gathering dust in three old boxes for the best part of a century.

In 1867, the sighting of a pod of Long-finned Pilot Whales was reported in many newspapers and was later recorded in the Transactions of the Zoological Society. The following year, LPLS acquired acquired the skeleton of a sub-adult male Long-finned Pilot Whale and a photo from around 1900 shows this on display in the Philosophical Hall.

But after this time, the specimen seems to have disappeared into storage. Now, thanks to the generous funding of the LPLS, the National Lottery Heritage Fund and the Friends of Leeds City Museums and a large grant from LPLS as part of their 200th anniversary celebrations, the skeleton of this magnificent creature now hangs proudly from the ceiling outside the Natural History Gallery.

The conservation, re-articulation and re-hanging of the whale itself was carried out by the natural science conservator, Nigel Larkin, who has been involved in several similar projects including the spectacular Fin Whale at the University Museum of Zoology in Cambridge. Along with having to clean many of the bones of dirt, another formidable challenge faced by Nigel was that several of the bones were missing.

Technology, however, offered a solution. By scanning extant bones and modelling smaller parts of teeth from another Longfinned Pilot Whale in the University Museum of Zoology in Cambridge, Nigel was able to recreate the missing bones using 3D printing.

The restored skeleton went on display outside the Life on Earth Gallery at Leeds City Museum on 26th October 2019 and was celebrated with a specially commissioned poem by Winston Plowes and a talk on the evolution of whales by Dr. Dan Franks of the University of York. LPLS are very grateful to the University Museum of Zoology in Cambridge for their help with this work, and are delighted that the re-opening of Leeds City Museum means the public can now finally see this wonderful exhibit.

With thanks to Dr. John Lydon. 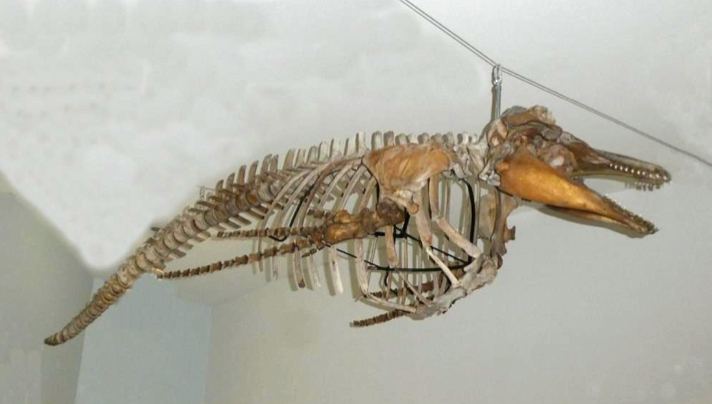 ‘Sense of line’ – Exhibition of drawings by Imtiaz Dharkar – 2019